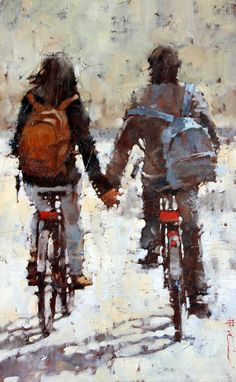 “The first time you fall in love, it changes you forever and no matter how hard you try, that feeling just never goes away.” – Nicholas Sparks

We all have that first love we can never get over with no matter how long the time had passed. Cold-blooded geek and adventure-seeker as I may seem, I do have my fair share of these sentiments. Today, April 27, 2015, I never thought this long buried feelings will ever surface again. I was riding the jeepney, heading home when I suddenly noticed that there were hands feeling my lap. I was too overwhelmed conversing with Ed Sheeran in my earphones that it took awhile before I noticed such intrusion. Imagine how alarmed I was at that moment. However, all my senses came back to life when I got to meet the deep soothed eyes of the owner of those hands – the very same black orbs that caused my heart to go cart-wheeling miles away. He smiled and just like before, my stomach tightened like I was about to vomit but the problem this time, he did not aged. I mean, he was young – too young compared to my two decades of existence here on Earth. It didn’t take long before two arms wrapped around the small body of my intruder. It was then that my senses really gotten me. He was not young; he got even too old for his age as a result probably of too much work and stress. He no longer smiles a lot; he didn’t even smile at me, the way he did back then, as a sign of recognition. And to add more insult to injury, he didn’t anymore bring butterflies in my stomach; instead, he brought tons of regrets – regrets I never thought I could have. And the ‘intruder’ I was referring to earlier was not him but no other than the son of the woman beside him, his wife.

Back then, I thought he was my fairytale. I have been an avid fan of pocketbooks during high school. The last time I saw him was when I was third year after that, I could no longer see him outside the house they rented blocks away from our neighborhood playing that old Extreme guitar. At the back of my mind, I was hoping that he too was fulfilling his own destiny and that someday, we will see each other again, will be properly introduced and will be making the love story I have always dreamt of having. But the incident today awakened me from my deep slumber. No, I was not Sleeping Beauty. Not even close. And life is not a fairytale – never will be. However, not because my first love failed to recognize me and that he had already a family, my hopes of living a happy life will not work anymore. Life is not about making fairytales, fighting with dragons and having your feet be swept by knight in shining armor or princes in white horses. Life is more than that. Life is waking up from the expectations set by society, making your own destiny with or without a partner in crime, and living happily, though not ever after, but in each and every moment in this borrowed life.