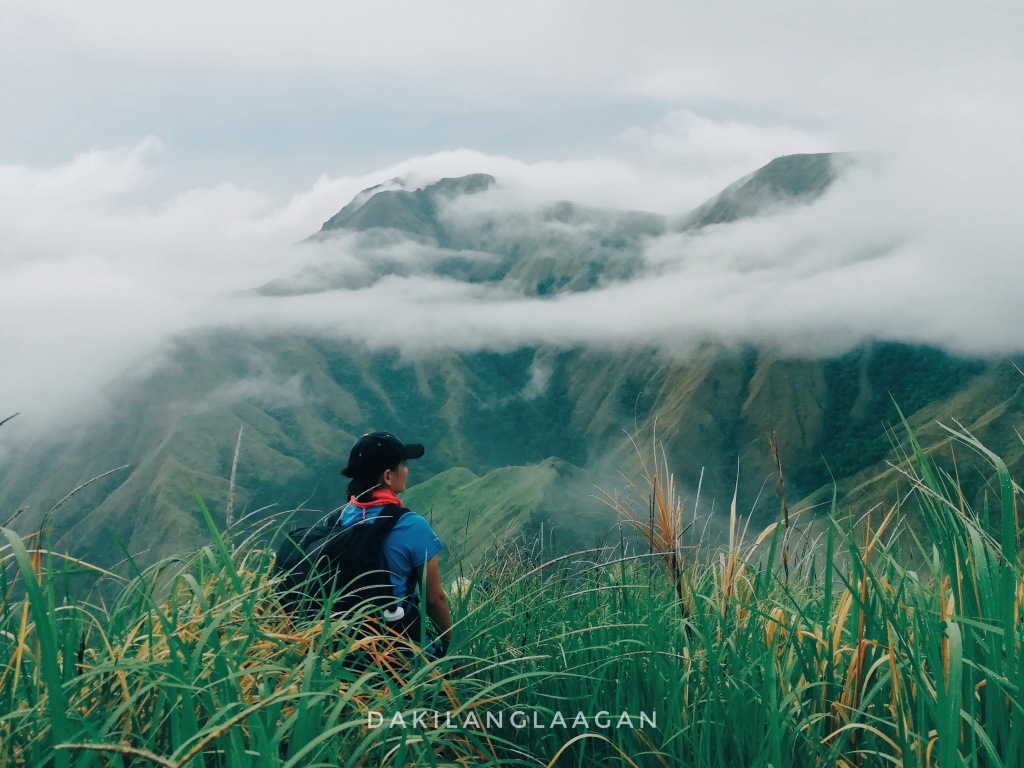 My choice of words depends on the people I deal with. Since I’m working in a learning institution, you’d expect me to talk formally because, you know, “modeling”. But of course, when pressed with all the deadlines and demanding people, I turn into a Super Saiyan and that’s when all the foul words learned from my neighborhood come in.

Luckily, hiking came into the picture. Several days with the forest and mountains allowed me to experience a different kind of peace and self-control. But not all hiking activities results in deep reflection; not when you’re scaling the most “difficult” among Panay’s trilogy – Mt. Baloy-daku.

Such a memorable climb to Mt. Baloy Daku began with fandom. I have a weird habit of reading all posts of a blogger if I find him/her interesting. After reading Sir Adonis’ ninety-day immersion amongst the mountains of Cordillera (I Found God in the Mountains), I got engrossed in the rest of his stories – including his several attempts of reaching Mt. Baloy’s summit.

I began to research and wonder how difficult is ‘difficult’, given his hardcore background. So when he posted an invitation about his final attempt to summit Baloy-daku, I sent a private message indicating my interest. Later did I found out that I was not the only curious being from Cebu who wanted to hike the notorious mountain.

Fellow hikers, Chabs and Tuts, came into the picture, validating my theory that Mt. Baloy-daku would be a terrible conquest. Hence, a die-hike every Sunday was initiated by Chabs following the Spartan-Manggapares-Napo-Babag-Bocaue-Pamutan-Banawa route. But no amount of practice spared us from the wrath of Mt. Baloy. More than the trail difficulty, our patience and endurance were tested.

I loved the first day of our Mt. Baloy Daku hike. We were blessed with fine weather, contrary to PAGASA’s “heavy thunderstorm” forecast. It consisted of several river crossing from Barangay Agustin to the river campsite. But what I was not prepared for was the steep ascent to the ridge. To get to the top, we had to deal with the talahib, loose soil, and an almost 90 degrees uphill climb. I wanted to retract the first sentence of this paragraph, but the view while ascending was too much to complain for – almost resembling to Alicia’s panoramic hills, but this time, with the fog and sunset in the background.

We stayed a minutes on the ridge before resuming the hike to our first campsite.

I never thought there’d come a day when I would thank heavens for inventing gloves. Thanks to such pair, I earned few talahib cuts during the Mt. Baloy Daku hike. Much of the second day was spent dealing with talahib, limatik (leeches), and traversing ridges from Baloy Gamay to Baloy Dako.

True to the words of some locals, it began to rain the moment the lead pack reached Father Agustine Campsite. It is believed that the guardians of the mountain are quite hostile with visitors trespassing in their vicinity. Good thing, we were blessed with the Superhumans of Panay – Kevin, Sir Nath, and Kuya Jun – who instantly set a bivouac campsite, created a diversion for the water flow, and sealed all shelter opening from limatik entry. Instead of setting up our own tents like the first night, we all squeezed into the makeshift shelter and spent the rest of the night praying that we won’t be eaten alive by the limatiks.

REALIZATION: Tuts found out that it would be easier to remove the sucking parasite if you spray it with alcohol. Moreover, applying petroleum jelly can be of great help too!

SECOND REALIZATION: Limatiks can grow favoritism. Among us all, it was Chabs and Paula who got the most number of limatiks hanging around their shoes, legs, and leggings.

A lot of emotions poured out on our third day of our Mt. Baloy-daku hike. It started with an early morning announcement that our ration may not be enough to last for the rest of the hike. So adjustments were made.

Instead of the initially planned breakfast meal, we decided to have arrozcaldo with the rice that was left of last night’s meal. The biggest problem there was that: I was tasked to cook. Man, my family would surely die laughing if they’d know how I prepared food for my comrades. (Tell me I’m not the only one who’s banned from the kitchen at home)

Good thing Sir Nath was quite particular with his instructions. I survived and they didn’t get poisoned with what I prepared. Eksdi. Nairaos rin!

Fast forward, the hike commenced and in less than an hour, we arrived at the summit of Mt. Baloy-daku! We didn’t stay long there since it continued raining and the fog began to thicken as well. As much as we wanted to celebrate, we were faced with the second part of the hike: downhell. Going up is a choice, going down is mandatory.

During regular hikes, down hills are my most favorite parts of the journey. I’d even run, if my knees allow. But man, Mt. Baloy Daku downhell is no easy feat. We have to pass Enzo Peak, Joke Peak (name combination of Jonathan and Kevin), and the never-ending Kinulitan Trail – where we have to crawl, hang, and swing around the leaves and branches of ‘ragiwriw’.

And the tale does not end there; probably the worst part of the trail was the several hours of scrambling amongst loose soil and an almost ninety-degree downhill. It was not difficult to get frustrated at that time. Since we were in the middle pack, we didn’t know how far we were from the campsite. We could hear the loud rushing of the river, but no river was within sight. We could hear the echoes of the lead pack, but to no traces of them. Add to that the several times we had to slip, fall, and cry out in pain.

Those were the times I learned to use properly “putang ina” and “gago”, not to mention my mothertongue’s @%@R%^%@^*&#* This also reminded me of a favorite Facebook meme by a Spartan hiker (Jahmar) that goes: Ayoko na sa Earth.

And as if such were not enough, I’d like to remind you that we are short on food. So, imagine us eating our lunch…. without rice. Probably, the only highlight of the day, aside from summiting, was the refreshing treat brought by the river near the campsite.

Last day of our Mt. Baloy Daku hike. Everyone started ecstatic. According to Sir Nath, we would reach Barangay Busog by lunch and then short after that, we’d be back to Valderrama. We began to slack off and spent the rest of the hike sharing personal information about each other and the work we do. Seeing our chill pace, Jack (the only foreigner who completed Panay Trilogy), left the lead pack and joined us. Upon inquiry, he shared that Baloy became his favorite amongst the 9/9 that he has scaled and that he wanted to spend more time with it. ‘I don’t want to leave Mt. Baloy Daku,’ were his words.

Half of the day was spent tracing the mountains that we have traversed and recounting the difficulties we have faced head-on. We arrived at the barangay captain’s house and feasted over their local nilagang baboy mixed with langka. It seemed like a treat for a job well done but the truth is… we were just being prepared for the concluding part of the program – the indefinite river crossing. Did I mention how much I love river trekking? I take it back now. Seriously, though it wasn’t as difficult in comparison to ragiwriw and direct ascent, it’s my least favorite part of the hike.

Four hours of crossing waist-level river is no joke. If not for Kevin and Sir Adonis, I would have been washed away to Valderrama. This is what you get for declining the use of trek pole, huh. Around this time, I wished there were stronger words than “putang ina” and “gago” because no amount of comforting words would surmount the raging emotions within me. In the words of Lagataw, the last two days of the hike were a test of patience – my worst enemy.

The day prior to our Mt. Baloy Daku hike, Kevin seemed excited to learn Bisaya given that four members of the group were from Cebu. But it went the other way around. Instead of him learning new words, it was us who learned to value the proper expression of these words. We learned when to stop when borderline has been crossed, how powerful magic words such as “thanks” and “sorry” can be, and why we should go beyond judging people with the words that they have chosen to use. More than just the successful assault, Mt. Baloy Daku taught us that sometimes… words are not enough to contain the enormity of what we feel. And in the absence of words, there goes the real essence of life: such a beautiful journey to keep in memory.

Special thanks to Lagataw for organizing this event, to his team consisting the Superhumans of Panay – Sir Nath and Kevin – for meeting all ends to make this multi-dayhike a success, and to the whole team (Chabs, Tuts, Sir Mark, Paula, Jack, Wazi, Ledz, and Kuya Jun), for understanding the cultural differences of each participant. Overall, it was an honor to be with you and I hope to see you guys one of these days. Kruhay! *wink*